By Mike Arnold; prototype photographs by the author and Tony Madieros

Any watcher of SP’s operations in the late 1980s and early 1990s would be aware how short of power that road was – not only did they lease in a massive volume of power units but they also could not let their units be off the road for any length of time, hence their very care-worn external appearance. It also explains why the units which had been painted in the aborted SP/Santa Fe merger scheme (the so-called “kodachrome” colors of yellow, red and black) lasted so long in that scheme – very few were ever repainted back into SP corporate colors.

In 1994 SP placed an order with Morrison Knudsen (‘MK’), famed for their loco rebuild programs, for 133 units each producing 3,000 horse power. MK duly obliged, utilising an assortment of source locomotives for them: SD40s; SD45s and SDP45s. Some of the source SD45s had the flared radiator sections swapped out for radiators from GP40s that were also in the shops for conversion for MARC passenger work which had flared radiators fitted in exchange! Talk about scavenging! As with the last of the GP40M-2 purchases, the whole fleet of 133 was devoid of any familiar SP light arrays so stock EMD short and long hoods are standard fayre.

The end product is used on anything from helper sets over the tough SP grades (Donner; Tehachapi; Cajon, Cuesta etc); MOW service; to additional power on manifests etc – a jack of all trades, though seldom in unit intermodal and coal trains.

To me this was a challenge as the locomotives are so quintessentially SP in those latter years of the SP and into the current day. Given SD40M-2s are so varied, they also offer a very interesting modelling project so I poured over photos of the prototype (sources detailed at the end) and identified five candidates:

3 x flared units from Kato SD45s, one in SP colors and two in UP (but one now in the CEFX lease fleet in UP colors with all UP branding removed is not ex-SP but looked too good not to model it); 1 x SD40-based unit in SP with UP patch; and 1 x SDP45 in SP colors. 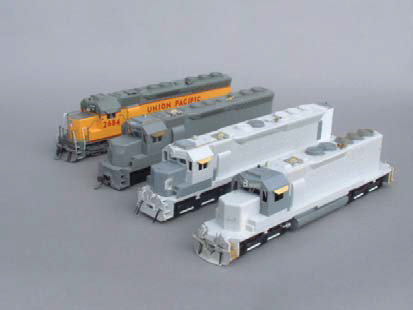 And it all started with the purchase of a Railpower SD40 body and chassis block from Ken Eaglesham (who enquired whether I was still doing kitbashes and detailing jobs – see below, Ken!). The shot to the right shows four units in various states of dress. However the purpose of this article is not so much to tell you how I did each one but more on what the detail differences are. As with the earlier article on the GP40-2s, there are plenty of detail parts available from Details West, Detail Associates and Cannon & Co to make a fairly accurate model of any variant of SP’s MK SD40M-2 rebuilds – so no excuses now.

#2684
This is a standard Kato in UP colours with the branding removed as it is very 1970s, paint work touched up with Scalecoat Armor Yellow and new decals applied. The only details added to the unit are the required air conditioner on the cab roof and the antenna stand and related details and ducting. One final change was applying a wider cross strut to the truck side frames to resemble the later version which was applied to all MK units with few exceptions (#2684 was not an exception!). See photo below of identical sister the #2681. 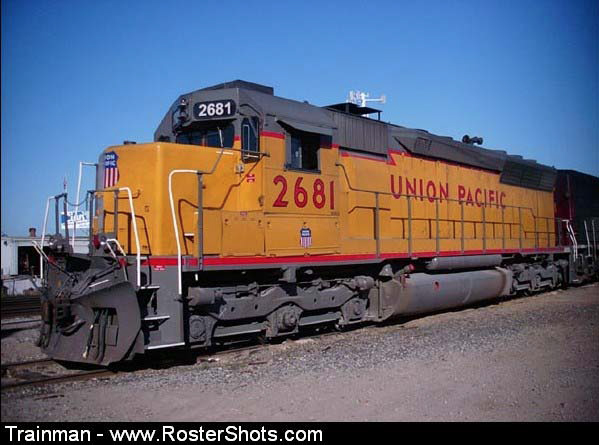 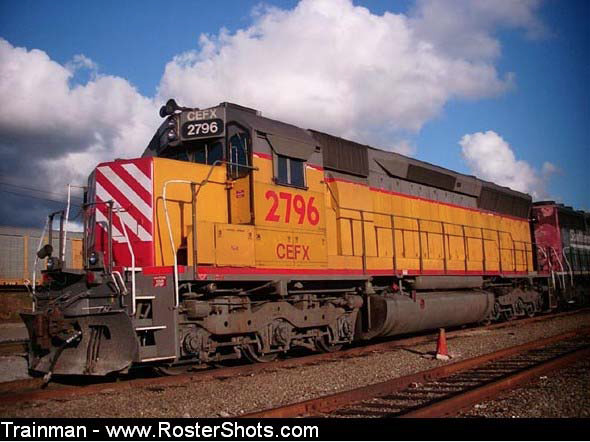 The CEFX lease unit #2796 (though not strictly within the scope of this article as it is not ex-SP – I think it looks good and Microscale do a great decal sheet) will be dealt with as #2684 but no UP decals will be added, only yellow patches and its former UP number, together with red/white warning chevrons to the short hood, and the same details added.

The SP unit is using on an undecorated Kato SD45 unit. The same details are added as for the other two but will be painted in SP dark lark gray, suitably weathered down. 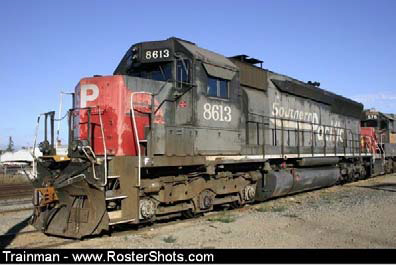 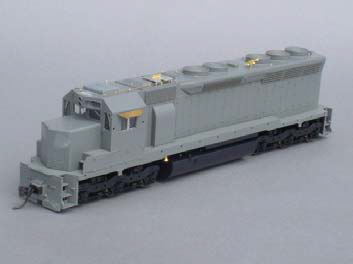 SDP45 bodied unit
This will emerge as #8693. I followed an article on kitbashing one of these that appeared in Model Railroading magazine a few years ago, making an Erie Lackawanna one. Oddly enough many of these became Conrail units and a number formed the basis of the MK rebuilds for SP. This is essentially an SD45 with the long hood end chopped off immediately behind the flared section and the whole long hood extended by an additional section of plain body work with a standard EMD rear hood end. The short hood nose is a Cannon & Co kit adapted as the hand wheel brake is in a notch cut into the brakeman’s side. This is a very distinctive spotting feature (see the model photo below).

It took two Railpower SD45 body kits to make (the walkway is extended), and I made it to fit a Rail Power SD60/60M chassis block, to avoid milling down the FP45 as was used in the article. This may not be to absolute scale but it looks very close. I have subsequently acquired a couple of Athearn SD50s undecorated and am now toying with the idea of fitting that chassis to this body but the body weight at the end of the long hood will need cutting back to fit (have you tried cutting that mayzac compound?). 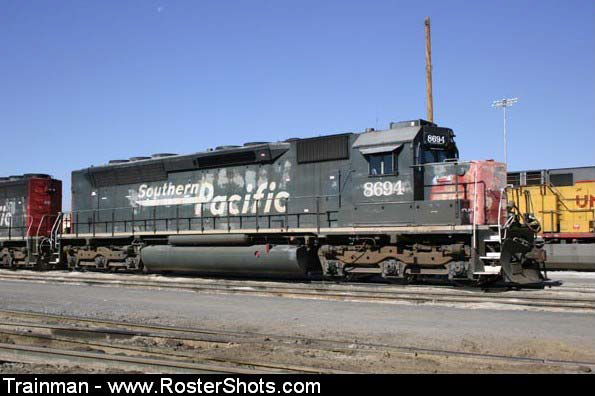 As the photo of the model shows this unit is still awaiting its paint – quite a worrying stage when so much work has gone into building the body but I will need to take the plunge.

When researching this unit, I had originally found a picture of UP patched unit #2715 – it had what looked like an SD40 body, with brake stand not on the short hood or like on SD45s on the long hood engineer’s side but rather centrally at the very rear against the rear hood end, antenna stand and a new small UP aerial dome. It also had the speed lettering on the long hood sides blocked out (or crudely patched) in UP harbour mist gray. So it looked quite unique. A start was made and lots of detail added, including those fabulous new fans from Cannon, with that see-through look. I am not sure what made me study the photo one last time but I did and spotted a glaring error I had made – #2715 has a dash-2 type dynamic brake housing (as on SD40-2s – see sister unit #2713 below) but I had modelled it with a plain SD40 one and it was now too late to go back and re-do anything. 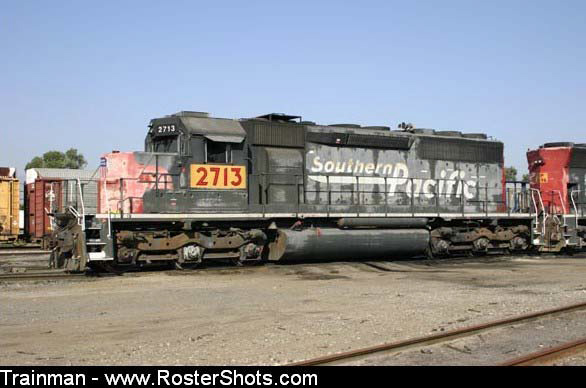 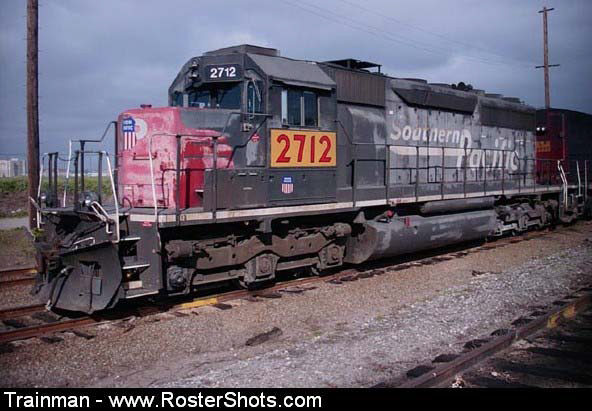 Fortunately I spotted a sister unit, #2712 (right above) , which had the right dynamic brakes but the speed lettering was not blanked out. However given I had not started the painting this was a small price to pay. In any event it gives me an excuse to do another one with a dash-2 housing in the future.

Many of the units are still running in original un-patched colours of the SP but many have been totally repainted into UP yellow and others like those depicted have been patched – even #2684 is a patch job as although it was repainted into UP yellow it was subsequently renumbered due to the large deliveries of SD70Ms taking up the block of numbers allocated originally on merger in 1996.

Finally I must give thanks to Tony Madieros, a resident of California, who gave me permission for use of his prototype photos.