Forum for members of the NMRA British Region
http://www.nmrabr.org.uk/forum/

by BrianMoore
Recently, I completed a repaint job to a Walthers American powered crane, which I've numbered SPMW 4098, basing it on the actual SPMW 5595. I hand-brushed the SP orange over the original yellow, as it was too difficult to remove the rigging for a respray, and it seemed to turn out OK. I installed a TCS decoder, and connected up a front and rear light.

Here's a link to a YouTube video of it running at RS Tower last weekend: https://www.youtube.com/watch?v=XrbA35zoGNE 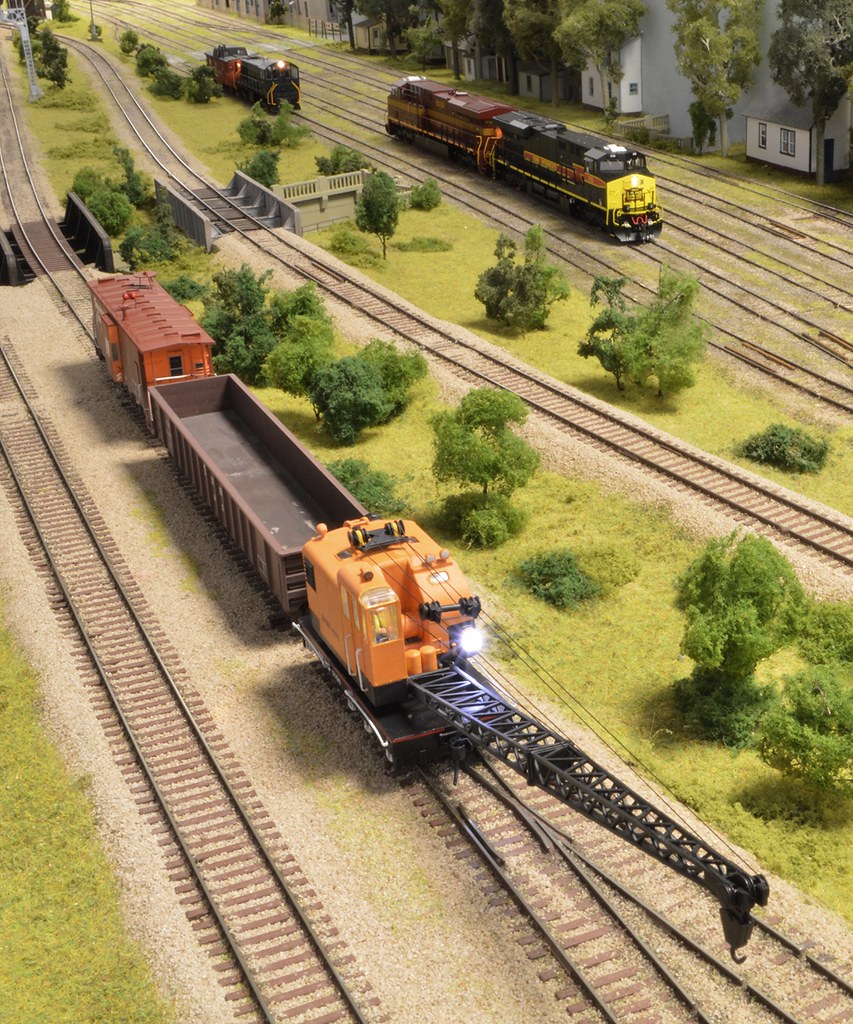 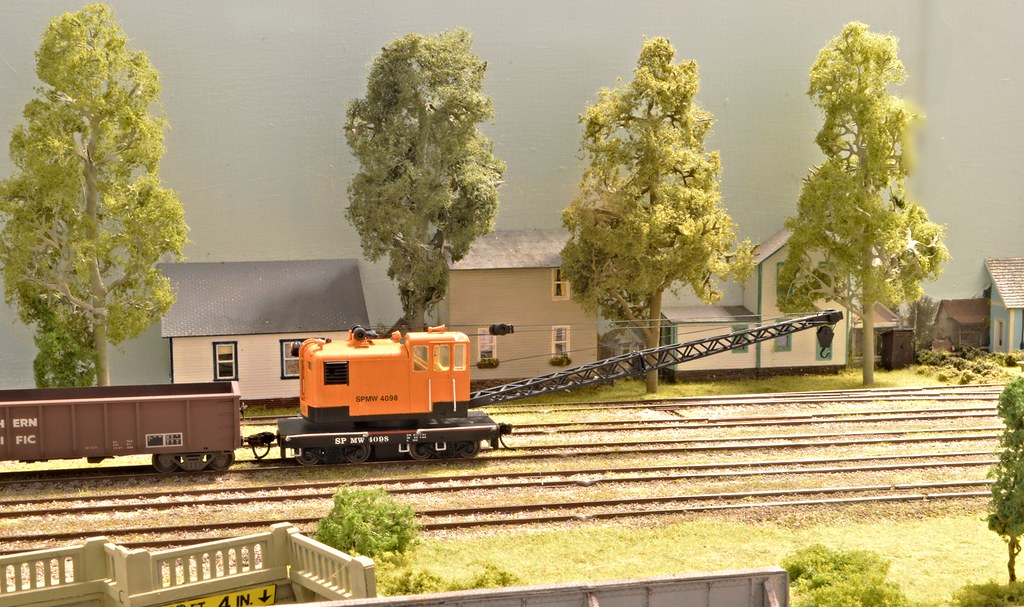 by BrianMoore
In respect of portraying accurate operations, I've just received the following information from a fellow SP fan in the US, who saw the video:

I do know that such cranes - labeled by the manufacturer as LocoCranes - did operate in this fashion that your layout video illustrates. While doing general MW work these cranes would be configured for said work beforehand and not need a boom car in the consist to provide support. Specialized operations such as bridge or heavy-lift jobs usually had a boom car trailing or nearby to provide the equipment needed for a variety of changing tasks while out doing the job. Most common would be wreck cranes which needed all available accessories at hand to sort out any kind of re-railing/salvage operation.

Since the operator faces the boom in regular operation, the normal transit configuration would be boom-first while operating solo or towing a short consist as your prototype and model videos illustrate. Reversing the boom to a trailing position and transiting with the operator facing backwards in that fashion is dangerous at best to all involved-the operator is unable to see the track ahead properly or operate the controls effectively while twisted like a pretzel looking behind to see where he’s going leaning halfway out the cab door. Also, driving ‘backwards’ while using a small rearview mirror to see is asking for trouble. Yes, it was occasionally done but generally frowned upon. One crane operator I worked with liked having a bouncing boom way out in front to ‘protect’ his movements from impatient motorists. He often remarked that he looked forward to skewing the idiot driver who dared run around the dropped crossing gates in front of him.

While these cranes operated autonomously in this fashion in their work limits, transit to distant locations was handled via freight trains with the crane (and accompanying consist) handled at the rear of the train, with the boom trailing, either over a boom car, flat or gondola depending on the job. Depending on the railroad, some were handled just ahead of the caboose while others were coupled behind the caboose. All the cranes I came across were limited to a 25 mph speed restriction as Ken mentioned for solo, towing or dead-in-tow situations. Most guys I knew stayed well below the 25 mph limit especially on bad track and they only made those speeds trailing on a freight train. Motoring down the main pointed forward in a nose-heavy vehicle bucking along with the boom swaying downward threatening to bury itself into the ties on an unseen dip was enough to reinforce the rule.


I now throw down the gauntlet for someone else to do one in Armour Yellow, and we can have jousting matches on a double-track main line.

by mec_alf
Very impressive. I saw one of the cranes being moved past Donner Ski Ranch, presumably heading from Sparks towards Sacramento, behind a GP40; unfortunately I was in ski school about 300 yards from the main line so couldn't do anything about photographing it.
All times are UTC+01:00
Page 1 of 1
Powered by phpBB® Forum Software © phpBB Limited
https://www.phpbb.com/